There’s nothing that can match the bright, inviting, yellow-orange colour of a warm turmeric latte, or a delicious Indian curry.  Part of the surging popularity of turmeric is the growing body of research around its various health benefits.

After you start learning about turmeric and other beneficial foods, you can deepen your knowledge through holistic nutrition certifications.  Meanwhile let’s talk about what turmeric can do for you. 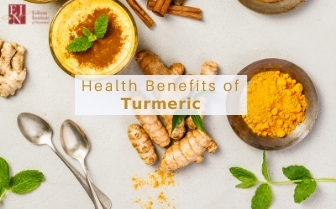 Turmeric is a spice, sourced from the root of the turmeric plant, which is a member of the ginger family. (What is ginger tea good for? Read this article to find out more)

Its warm, bitter flavour is a key component of many Asian foods, such as curries, and it’s also used to add colour to other foods and cosmetics. In India, turmeric has also been used for thousands of years as a medicinal herb. The flavour, colour, and medicinal properties all come from one chemical: curcumin.

Curcumin is a chemical in turmeric that gives it its yellow colour, and the reason turmeric has much of its culinary and medicinal value. This chemical is believed to be anti inflammatory, which means it can be helpful for a wide variety of health problems related to inflammation.  Is lemon juice an anti inflammatory too? Yes, which is why some people like to pair turmeric with lemon.

It has also been shown to have a number of effects on a cellular level when researchers do a live cell analysis, which proves promising in creating new treatments. To get the best effects, consider a turmeric extract that contains a significant amount of curcumin, as well as piperine. You’ll get much more of these beneficial compounds than you would just by eating turmeric in food. Piperine, found in black pepper, helps your body absorb curcumin into the bloodstream.

Among the many things turmeric has been used for include:

Some studies are showing particular promise for turmeric’s efficacy as treatment for certain conditions and lowering your risk of others.

Chronic inflammation can be the source of a number of health problems, especially in the Western world. There are many different molecules that play a role in inflammation, and studies have shown that curcumin can inhibit a number of them. Curcumin has been shown to be as effective as other anti inflammatory drugs, but without the unpleasant side effects.

3. It Can Help Manage Arthritis Pain

Arthritis is a common inflammatory autoimmune disorder, characterized by swelling and pain in the joints. It’s no surprise then that an anti-inflammatory compound like curcumin can be useful in managing arthritis pain. Studies suggest that turmeric can be helpful alongside regular arthritis treatments in easing pain and stiffness.

4. It Can Lower Risk Of Cancer

Curcumin’s ability to interact with a variety of molecules in the body makes it an interesting possibility for treating cancer. With studies connecting inflammation and cancerous cell growth, an anti-inflammatory compound like curcumin could have significant effects. Indeed, there is evidence to suggest that curcumin can target different cell signalling pathways that play a role in the proliferation of cancer cells.

5. It Can Lower Risk Of Heart Disease

Cardiovascular diseases are among the leading causes of death worldwide. Curcumin is one of a number of traditional herbal treatments that is being examined for its potential to prevent and treat heart disease. Its anti-inflammatory properties are beneficial for heart health, as is its ability to lower the levels of triglycerides in the blood, and improve endothelial function. The endothelium is the lining of your blood vessels, and keeping it functioning well is important for regulating blood pressure, blood clotting, and other important components of heart health. This can help reduce the risk of heart attacks and other cardiovascular problems.

6. It Can Help With Depression

If the cheery warm yellow colour of turmeric doesn’t boost your mood, curcumin just might. A small study suggests that curcumin can be as effective as Prozac in treating clinical depression. Curcumin also boosts the levels of brain-derived neurotrophic factor, and may also increase serotonin and dopamine. These are all important brain chemicals related to mood, learning, and memory.

There are other aspects of brain health that curcumin can help with. Work is being done to examine what role curcumin could play in managing Alzheimer’s disease. As an anti-inflammatory and antioxidant, curcumin would be beneficial in mitigating the impacts of inflammation and oxidation, which can play a role in Alzheimer’s disease. Because it can cross the blood-brain barrier, curcumin is uniquely positioned to help neurological function. It has even been shown to clear away amyloid plaques, the build-up of proteins in the brain that characterize Alzheimer’s.

Are There Any Risks Associated With Turmeric?

Just like any food, turmeric might not be for everyone, and it’s important to consider your own circumstances before embarking on a new treatment. Turmeric and curcumin supplements are generally safe to consume or use on the skin. However, medicinal amounts of curcumin are not considered safe to take during pregnancy or breastfeeding, and may worsen conditions like gallbladder problems, iron deficiency, or liver disease.

It can also slow blood clotting, so don’t take curcumin if you have clotting problems, take blood thinners, or are going for surgery. No matter what treatment or supplement you are considering, always consult with your health care providers before you start taking it.